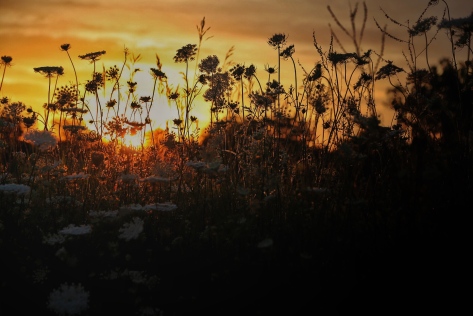 Last Sunday morning I woke early as the sun was rising. I could not help but notice how gorgeous the wildflowers looked at the back of our lot. So I grabbed my camera and snapped a few pics. I especially liked the way this one turned out and used it to update the header on my blog. Sometimes the most beautiful scenes are right in front of us. The play of the sunlight through a window, or the sun rising through the wildflowers. We simply have to open our eyes to see it, and be willing to take a moment to appreciate it.

You who are trying to be justified by the law have been alienated from Christ; you have fallen away from grace.
Galatians 5:4 (NIV)

I’ve always been a movie lover. There are movies that I can watch over and over and over again and each time I do I seem to catch little things I’d never seen or heard before.  Lines from the film seem to enter conversation. For Wendy and me, one of those movies is Princess Bride. A favorite line of our is when Inigo Montoya tells Vizzini, “You keep using that word. I do not think it means what you think it means.’

Among the community of Jesus’ followers the phrase “fallen from grace” is often used to refer to those who at one time were followers, but seemed to leave the path of faith to follow after sinful appetites. Other believers will say that this person has “fallen from grace.” In fact, these are the only circumstances in which I hear this phrase used. To quote Inigo Montoya, “You keep using those words. I do not think it means what you think it means.”

This is a huge distinction. Walking the journey of faith is a balancing act from which you can stumble and fall in either way. Certainly you can stumble and pursue unhealthy appetites. That’s why Paul says a a few lines later: “You, my brothers and sisters, were called to be free. But do not use your freedom to indulge the flesh; rather, serve one another humbly in love.” But you can also stumble and “fall from grace” by pursuing a path of rigid, religious rules in which you judge a person’s faith by how they measure up to your religious yard stick.

To quote another famous movie line that creeps into my conversation on a regular basis: “Daniel-san. Must learn balance.“

Archaeologists recently uncovered this gem (I found it in a tub of my parents’ family photos) from c. 1983. An early work by photographer Reed Davis (www.reeddavisphotopraphy.com). Anyone from the Des Moines area will recognize the iconic Traveler’s insurance sign that is a signature piece of the Des Moines skyline. The Traveler’s umbrella has been in a few different photos over the years.

About ten years or so after the first photo was taken, it was photographer Eric Smoldt  (http://ericsmoldt.com) who snapped this black and white photo of me under the umbrella on a downtown Des Moines photo safari.

Add another ten years or so, and it was Jeff Bokhoven (http://www.designerimagesphotography.com) who took this awesome photo of me and my best men on New Year’s Eve 2005, just before Wendy and I said, “I do.”

What’s really cool is that in the late 1970s and early 1980s my dad was partner in Eagle Sign Company who, at the time, owned and leased the Traveler’s Umbrella sign. So not only is the umbrella an iconic landmark, but I kinda get to claim it as a family heirloom.

What can I say? I love Des Moines. 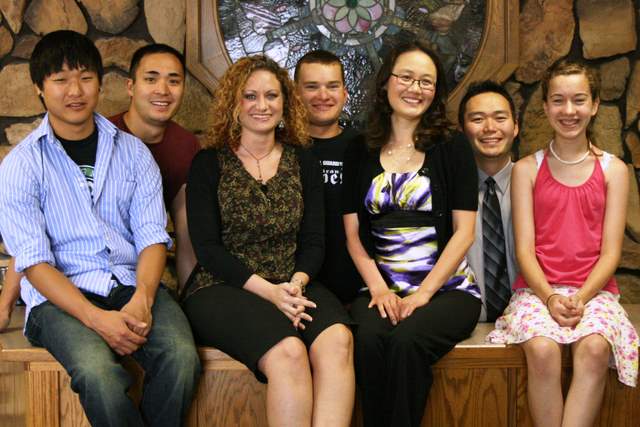 But when the set time had fully come, God sent his Son, born of a woman, born under the law, to redeem those under the law, that we might receive adoption to sonship. Because you are his sons, God sent the Spirit of his Son into our hearts, the Spirit who calls out, “Abba, Father.” So you are no longer a slave, but God’s child; and since you are his child, God has made you also an heir.
Galatians 4:4-7 (NIV)

I was blessed to grow up in a strong, nuclear family. The whole concept of adoption was fairly foreign to me. It was through a college roommate that I was first exposed to the realities of adoption. Married to Wendy, I have gained a greater understanding and respect for those families who have walked the path of adoption.

Wendy was adopted, twice. Her family includes five adopted siblings when you count her father adopting her. Family pictures with Wendy’s family are awesome. It’s a motley crew, to be sure. It has been great for me to be a part of their family. It has opened up for me a whole new area of understanding.

In today’s chapter, Paul uses the metaphor of adoption to discuss the spiritual relationship we have with God. Jesus established the metaphor after His resurrection. Before His death He referred to the disciples as “friends,” but when the ladies met the risen Christ Jesus told them, “go and tell my brothers that I am ascending to our Father.” The implication was clear, when we follow Jesus and receive Him into our hearts we are spiritually adopted as a child of God. We become co-heirs with Jesus.

Today, I’m thankful for my adoption into God’s family. It’s high time I stopped clinging to the idea that I’m in God’s employ and started embracing the reality that I am God’s heir.

For only crazy people would think they could complete by their own efforts what was begun by God.
Galatians 3:3 (MSG)

While in college, I had two other guys with whom I began to share my life journey. We met on Saturday mornings in the Great Room of Volkman Hall right after PeeWee’s Playhouse. It was the first time in my life that I’d met regularly and intentionally with other guys just to talk about our respective life journeys. We waded into, what was for us at the time, the deep weeds of life. We shared openly about our hurts and confessed our sins to each other. For me, it was monumental.

When college was over, the three of us each took our own paths in divergent directions. One of the guys I have continued to keep up with through periodic phone calls and Facebook. As I read the chapter this morning, I struck me that the other friend went the of the “crazy” Galatians.

The third member of our trio contacted me a few years after college. He’d found his way to a group who taught him that only by following their rigid religious rules could anyone truly call themselves a follower of Jesus. He accused me of not measuring up, of not truly being a follower. It sounded insane; The kind of insanity Paul was confronting among the Galatians. Having once followed by simply believing, my friend was now convinced that only by following a strict set of doctrinal beliefs and behavioral rules could he be “holy” and acceptable to God.

Today, I’m offering sincere prayers for the other two members of my college trio. I have such good memories of Saturday mornings with my Judson College homies wrapped in blankets, listening for Pee Wee’s secret word, and moose slippers. It was an important stretch of life’s journey for me and I will forever be grateful for that time and these two companions. I trust that whatever crazy Galatians-like path my one friend followed, God has been faithful in helping him find his way back to the simplicity of Jesus’ message: faith, grace, love, and forgiveness. 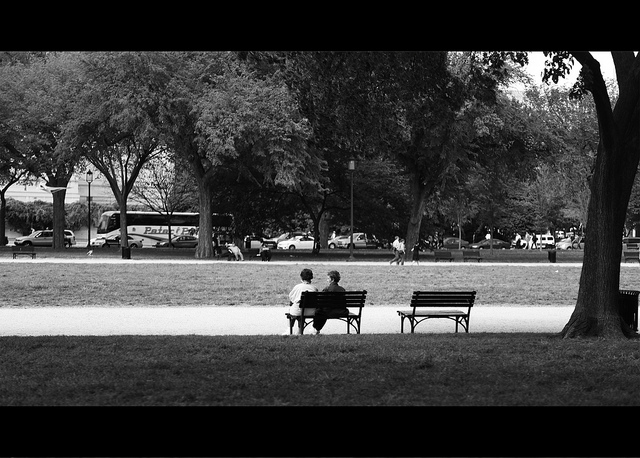 On “Remember When” Wednesdays I like to look back at some great posts of yesteryear and re-blog them for newer subscribers. This was originally posted in July, 2007.

Wendy’s four-month-old laptop crashed last Friday. The past ten days have been some of the busiest for Wendy’s job and the loss of the computer was agonizing. We took the laptop back to the Greek Squad on Friday and they immediately started the process of trying to recover the data off the hard drives. It would be a process of days to get the lap top back and even then Wendy would have to restore all of her software, all of her settings and rebuild her on-line life from scratch. Needless to say, she was angry, frustrated and depressed all weekend.

The situation only got worse on Monday when the Geek Squad called to inform her that they needed her “restoration disks”. Just an hour earlier I had left for meetings in Des Moines. Bad timing. This meant that she would have to drive to Des Moines and personally wait for up to five hours for the computer’s system to be restored so she could take it home. Wendy reluctantly took her book and found herself sitting on a bench outside of the Jordan Creek Mall reading as she waited.

A girl approached Wendy and asked to use her phone. Wendy obliged. Upon completion of the call the girl commented on Wendy’s tattoos. A conversation started. Wendy felt that still, small voice in her heart telling her this was not an ordinary conversation. This was a divine appointment. Seemingly, for no reason, the girl started to share the intimate details of her life to Wendy.

Wendy didn’t need to mention God. The girl raised the subject. Seeing “Rev. 21:5” tattooed on Wendy’s shoulder, the girl asked about the verse and then asked “Are you a Christian?”

The discussion continued. Wendy silently prayed that the computer guys wouldn’t call her to pick up her computer until after this conversation was over. The two sat on that bench for a long time. The girl  inexplicably poured out her heart to a stranger whom she met on a park bench outside of a mall. Wendy listened, related, and loved, reminding her that no matter where she runs in life – God does not let go. God has a plan for her life, and He won’t let go of her – even as she tries to let go of Him. The divine appointment ended with a hug, and with Wendy’s promise to pray for her. The girl walked away.

Within ten minutes her phone rang. The computer was ready. 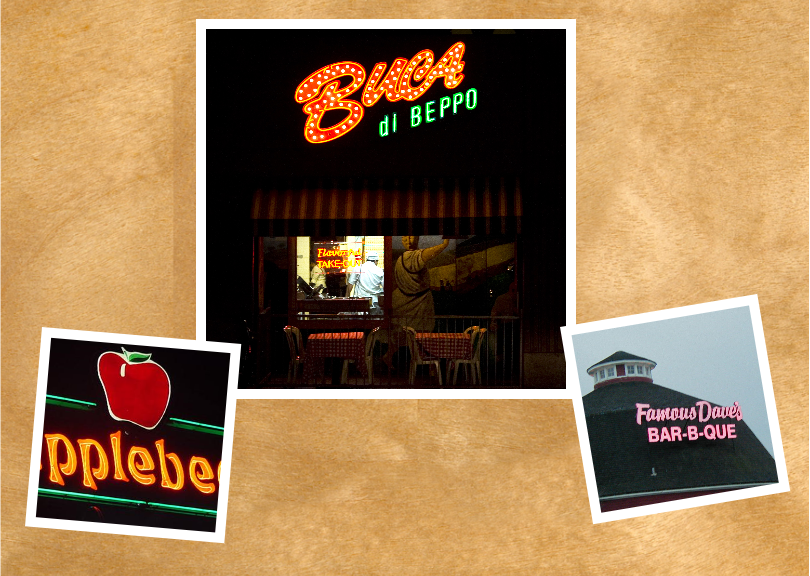 To the uninitiated, business travel may seem kinda cool and glamorous. Perhaps for some professions it is, but the reality is that I rarely see more than the inside of my client’s office and the inside of my hotel room. I’m usually tired by evening and just want to go somewhere reliable for a decent meal.

Here are the Top Five restaurants I like to frequent as a frequent traveler: 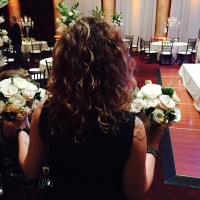