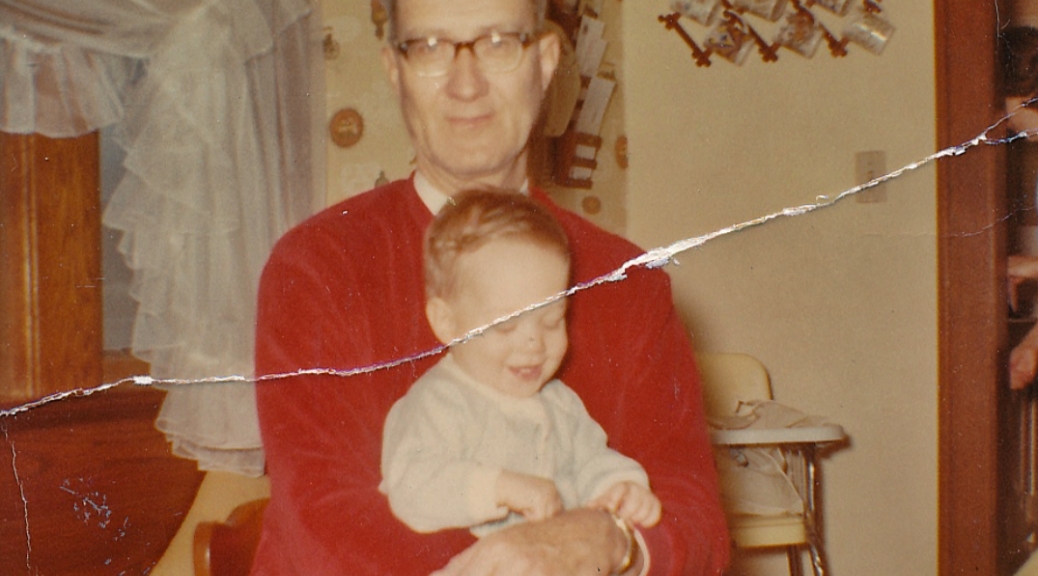 In my mind’s eye, I can vividly see my Grandpa Spec sitting at the head of his dining room table during a family meal, smoking his Dutch Masters cigar. There was a humor with which he approached life that always endeared me to him. I loved being his little shadow. It was only as an adult, as I learned his story, that I fully appreciated his humble and quiet joy.

On Spec’s 10th birthday he came home from school to find the remains of his father’s suicide. His mother sent him to be raised by his grandparents, while she kept his little brother and sister. He came of age during the Great Depression, got married nevertheless, almost lost his wife to childbirth, and scratched out a living in the tire business. He had so much to be bitter about. He had so many reasons to play the victim card, but he didn’t.

From the head of the table, cigar in hand, Grandpa would often smile, pound his fist on the table, and with a gleam in his eye insist, “I’m the king of this castle!” It was part of a never ending dance of teasing between he and Grandma Golly. They needled one another mercilessly whether they were competing at cards or betting on the World Series. In response to Grandpa’s claim to the throne, grandma hung a decorative plaque above the kitchen sink (Grandpa always did the dishes) which read, “I’m the boss of this house, and I have my wife’s permission to say so.”

As I read today’s chapter, Psalm 145, anew this morning, it was the first verse that leapt off the page at me. King David, the greatest King in Hebrew history, sings an exaltation to God whom he refers to as “my king.” The King has a King.

It’s hard for a modern reader to understand how this sentiment ran against the grain of the popular monarchy playbook of his times. Kings wanted the masses under control. Kings wanted an air of undisputed authority. Kings wanted people to fear them. To achieve these ends, Kings claimed to be gods. They might worship other deities for good measure, but they demanded that their people view them as a god themselves.

David always saw himself as a servant of the One True King of heaven. Having read all of his lyrics in the Psalms about enemies within his own kingdom seeking to slander and supplant him, I begin to wonder how much easier his reign might have been had he followed the playbook. But that’s what made David different, and God saw it in him when David was a shepherd-boy, the runt of Jesse’s litter of sons. Samuel balked. God assured the prophet. “He’s a man after my own heart.” David is humble. He acknowledges his role in the Great Story. He fully embraces position and place as God’s partner in the Divine Dance.

In my mind’s eye, I now distinctly see Grandpa Spec sitting on his glider rocker. He’s shirtless and wearing an old pair of shorts. (He might have central air-conditioning, but one doesn’t want to resort to that unless one has to. The Great Depression taught him many things. Frugality was at the top of the list). He is smoking his pipe now. It’s a summer afternoon and he is listening to the baseball game on the transistor radio. He survived many tragedies and trials on his life journey, but he humbly pressed on with simple faith and determination to do the right. He is king of his castle, and like David, eternally grateful to the King of Heaven for the blessing of his little three-bedroom, quarter-acre kingdom on the east side of Des Moines. He is the servant of his wife, and his family.

In the quiet this morning, I find myself reviewing my own “place and position.” Over the past year, I’ve observed that it’s easy, even fashionable, to feel the heady satisfaction of pious self-rule, then proudly take to the no-man’s-land of social media to stake one’s claim of divine-rightness and lord one’s opinions and world-view upon others, demanding submission upon threat of being sentenced to relational exile.

I don’t want to do that.

I want to try and follow David’s example, and Grandpa Spec’s example. I want the last song in my life’s anthology to be like Psalm 145, ascribing anything I’ve gained and every blessing I’ve been afforded to my King. In fact, when it comes right down to being the person Jesus asks me to be I must accept that I am Lord of no one. I am a servant of all.

God, help me to fully embrace that role today in thought, word, and deed.