Indeed, when Gentiles, who do not have the law, do by nature things required by the law, they are a law for themselves, even though they do not have the law. They show that the requirements of the law are written on their hearts, their consciences also bearing witness, and their thoughts sometimes accusing them and at other times even defending them.
Romans 2:14-15 (NIV)

One of the thematic threads I’ve observed throughout the Great Story is that the Spirit of God is not confined by the trappings of religion and its human penchant for systemic merit. Our human systems love things to fall into rigid rules and lawful order. Follow these rules, dress like this, talk like this, use these phrases, be seen doing these things, act like this when you’re in public, and everyone will know that you’re one of us.

Yet, as I’ve journeyed through the Great Story time-and-time-again I observe that there are those who follow the systemic rules on one hand while the whole time they are breaking the spirit of the law with the other. At the same time, there are those who don’t fit the meritorious religious system and its list of requirements, but who totally get the underlying Spirit that the system was trying to accomplish in the first place.

Then there is God accomplishing their purpose through the most unlikely character in the scene. The fool confounds the wise. The child shepherd kills the giant warrior. The least rises to rule over the greatest. The greatest enemy becomes the strongest ally.

Jesus channeled this theme over and over again. Perhaps the most challenging parable that Jesus taught was right at the climax of His teaching. He was getting down to the very core of his Message, and the leaders of the systemic religious order of merit would kill him for it. (See Matthew 25)

In the parable, Jesus divides everyone into two groups which He labels “sheep” and “goats”, but He might as well have labeled them “religious” and the “heathens.” Or, for the theme that Paul is addressing in today’s chapter, the “Jews” and the “Gentiles,” or perhaps it’s best labeled “God’s people” and “Those people.”

The first group looks like they belong to God’s flock because they look the part. They followed all the religious rules. They worked the system of merit for all it was worth. Jesus, however, says, “I never knew you” because while they followed the letter of the law on one hand, they ignored the heart of what the Law was supposed to create: love that looked out for the sick, the outcast, the foreigner, the lowly, and the weak.

Then Jesus turns to “those people” who were never part of the religious system at all. They’d not earned one single merit badge from the meritorious order. Jesus says, “Come on in to my kingdom” because even while they were outside the religious “system” and didn’t follow the legal rules, they found the heart of God. They practiced the law of love. They looked out for the sick, the outcast, the foreigner, the lowly, and the weak.

In today’s chapter Paul pushes into this theme big time. He’s writing to the followers of Jesus in Rom who fall into these two primary camps: Jews and Gentiles. From the Jews’ perspective it was the same systemic thought that Jesus had been dealing with. The Jewish believers saw it as “we God’s people” and “those people.” God’s people had been given “the Law” and had followed the religious meritorious order. The Gentiles, “those people,” were pagans, heathens, foreigners, and outsiders who had never been circumcised (merit badge #1) let alone practicing the exhaustive religious rulebook.

So, Paul picks up on Jesus’ theme and channels it as he begins his letter. The Gentile believers among Jesus’ followers, he’s basically arguing, are the goats in Jesus’ parable. They never had the rule book, the Law, yet they understood and obeyed the very heart of what the rulebook was designed to produce: love.

This morning I find myself challenged and taking a little heart inventory. Everyone knows that I’m a follower of Jesus. I’m one of the sheep and I make that abundantly clear in these posts. But, am I the sheep in Jesus’ parable? Am I looking all religious and righteous in these posts and then ignoring the very heart of what Jesus taught?

In the quiet I find myself asking who are the “goats” in my circles of influence? Who would my meritorious religious system tell me is one of “those people” but Jesus would look at that person’s heart and say, “Oh yeah. That’s one of mine.”? 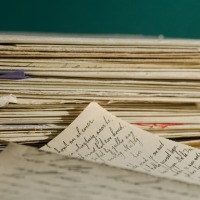