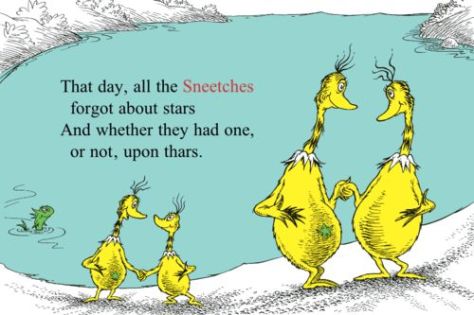 So when Peter went up to Jerusalem, the circumcised believers criticized him, saying, “Why did you go to uncircumcised men and eat with them?” Acts 11:2-3 (NSRV)

I love Dr. Seuss. I find the illustrations, the rhymes, and the created words even more entertaining as an adult than I did as a kid. As an adult, I also have an even greater appreciation for the lessons that Dr. Seuss taught us about human, though he did it through the most creative of fantastical creatures.

One of my favorites as both a kid and an adult is the story of The Sneetches. Some of the big yellow creatures had stars on their tummies, and some did not. What follows is a zany study of how we tend to discriminate through our prejudices and will go to great lengths to belong with the crowd.

The Sneetches came to mind this morning as I read about Peter’s return to Jerusalem from the house of Cornelius. The early followers of Jesus were an almost exclusively Jewish sect. And, like the star on a Sneetches tummy, the physical determination of whether you “belonged” to the Jewish faith as a man of that day was whether your penis was circumcised and the foreskin ritually removed. The practice went all the way back to Abraham and the Jews took great pride in having this physical evidence of their “belonging” to the Jewish faith.

So, when Peter returns from the house of Cornelius the non-Jew he is confronted by the Jewish followers of Jesus asking why he ate with the unclean, uncircumcised, lower class, dirty, rotten, don’t belong, non-Jewish Gentiles. The very question smacked of prejudice and socio-arrogance. I find it interesting that Dr. Luke saw fit to repeat Peter’s story in exacting detail rather than writing, “Peter told them what had happened.” A writer repeats things when they are important, and I believe Luke repeated the story he had just written because this was a big deal. The times they were a changin’. Think of telling southern Klu Klux Klan members a century ago that they had to start accepting African-Americans into their membership. This was going to shake things up in a big way.

But, God gave this experience to Peter who was the unquestioned spiritual leader of their faith and who had been placed into leadership by Jesus. This was a top down policy shift, and Luke records that the initial response of the believers in Jerusalem was acceptance. We know from other sources, however, that it wouldn’t be a peacefully and universally accepted paradigm shift.

In the end of Dr. Seuss’ tale of The Sneetches, the Sneetches with stars and the Sneetches without stars get so mixed up that it ceases to be relevant. It’s hard for us to relate to how radical it was for God to command Peter and the early Jewish followers to love non-Jewish Gentiles and accept them into the fold. People are people, however, and we have our own prejudices and forms of socio-arrogance.

Today is another good reminder for me to acknowledge my prejudices, and to let them go.

2 thoughts on “Of Sneetches and Circumcision” 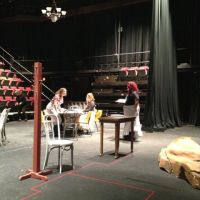 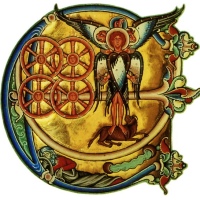 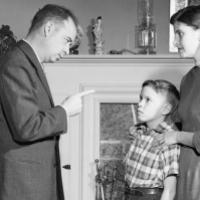