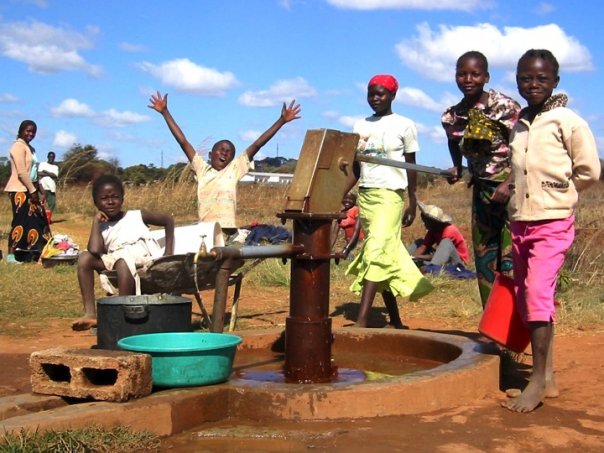 In the midst of a very severe trial, their overflowing joy and their extreme poverty welled up in rich generosity.
2 Corinthians 8:2 (NIV)

About 12 years ago Wendy and I made the decision to purchase my parents property at the lake. At the time the property had a  70 foot single-wide from the early 1970s which I used to refer to as “The Love Shack.” At the end of a gravel road, the property requires a well for water and a septic system for waste management. After agreeing to make the purchase my dad walked me through the process they went through each year to have their water supply tested and treated against the nasty things that can get into a natural water supply. It was pretty gross just thinking about it.

A year or so later we had a new well dug on the property. I’d never experienced this before, and I was fascinated by the process. The young man who owned the drilling service loved his work and I’ll never forget the passion and enthusiasm with which he went about his drilling a well. By the end of the day he’d explained to me that the old well on the property had been way too shallow which was why the water was prone to some of the nastiness that had to be tested and treated. The driller had to go much deeper than planned and get through some tough stretches of rock to reach the aquifer which would pump clean water to our house. I’ll never forget the guy grinning from ear-to-ear. “You’re pumping ‘crystal clear’ now, dude!”

That little experience really got me thinking just how much I take for granted the luxury of a clean water supply that I don’t have to think or worry about. That got me digging a little deeper for information about water in the world. The good news is that since 1990 great progress has been made. In just 25 years a staggering 2.5 Billion people have gained access to an improved water supply free from fear of contamination. I love it! That’s huge progress that we can feel good about. [cue: We are the World]. Nevertheless, there’s still 665 million people in the world who don’t have access to a simple, clean water supply. Most of them are in Africa. For many years Wendy and I have been supporters of Blood:Water Mission, a group actively working to improve access to clean water across Africa.

Along life’s journey I’ve had to confess that it sometimes takes an  experience for me to wake up to the needs of others, and the opportunity I have to make a difference.

In today’s chapter, we discover one of the major reasons Paul was writing his letter to the followers of Jesus in Corinth. There was a severe famine in area of Syria and Israel. Historical records confirm that a massive famine broke out in that region in 47 A.D. during the reign of Emperor Claudius. People were literally starving to death, and Paul had been taking up an offering among the believers in Greece and Asia Minor to take much needed supplies to the believers back in Jerusalem.

There was kind of a cool spiritual principle at work. Back when Jesus was tempted to turn stones to bread He quoted a verse from Deuteronomy to the enemy: “You shall not live on bread alone, but on every word the comes from the mouth of God.” The believers in Jerusalem had blessed Greece and Asia Minor by sending the Word and spreading Jesus’ Message through Paul and others. Now those believers in Greece and Asia Minor had the opportunity, in turn, to save the believers in Jerusalem from starvation by providing for their physical needs.

Yesterday I wrote about Paul finding joy in “all his troubles.” He uses that same same spiritual principle again, and takes it a step further, as he describes the believers in Macedonia who found joy amidst their trials and generosity amidst their poverty.

This morning in the quiet I find myself counting my blessings. Our hot water issue was fixed yesterday. It was a pesky annoyance caused by build up of ice that choked the flow of air to the system. Ultimately, it was a small problem. Such a luxury, and what an opportunity I continually have to make a difference in the lives of others through the abundance with which I’ve been blessed. The Macedonians, Paul wrote, had been generous despite their poverty. How much more generous can I be out of the wealth with which I’ve been blessed?