As Paul gathered an armful of sticks and was laying them on the fire, a poisonous snake, driven out by the heat, bit him on the hand. The people of the island saw it hanging from his hand and said to each other, “A murderer, no doubt! Though he escaped the sea, justice will not permit him to live.” But Paul shook off the snake into the fire and was unharmed. Acts 28:3-5 (NLT)

When Taylor called me from Africa a few weeks ago, we enjoyed a long conversation about the conditions where they are staying and what they are experiencing. One of the things I’ve consistently heard from friends and family who have travelled to remote, undeveloped areas of the world is that spiritual forces are much more visible in every day life compared to our own culture that tends to deny and suppress spiritual things. When I asked if this was true where they were staying and working, Taylor said that it was true without a doubt. As an example, she related the story of a local woman who had been possessed and had screamed non-stop at the top of her lungs for days.

It is impossible to journey through God’s Message and read the first-hand accounts of Jesus’ life without being faced with an uncomfortable realization about the spiritual realm. There are forces of Light and there are also forces of darkness. Jesus regularly encountered and confronted individuals who were possessed by spiritual darkness.

C.S. Lewis wrote in The Screwtape Letters, his classic book about the forces of spiritual darkness, that there are two equally foolish mistakes we can make when approaching this sensitive subject. One is to give too much consideration to the forces of darkness, the other is to give too little consideration to them. I often ponder this. While I do not doubt that many easily explained phenomena are incorrectly labeled as spiritual issues, I equally believe that many truly spiritual issues are incorrectly dismissed as easily explained phenomenon.

I loved the image of Paul getting bitten on the hand by the poisonous snake, holding it up and then shaking it off into the fire. Of course, the snake has been the metaphorical symbol of spiritual darkness since the Garden of Eden. Jesus taught that those who believe and receive Him into their hearts and lives are subsequently filled with Light, and where there is Light there is no darkness. That doesn’t mean that darkness cannot attack us. Like Paul, all who follow Jesus are susceptible to spiritual snake bites. We can take courage, however, that those who are in Christ have nothing to fear in these attacks; We can simply shake it off.

One thought on “Chapter-a-Day Acts 28” 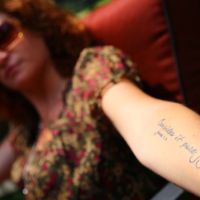