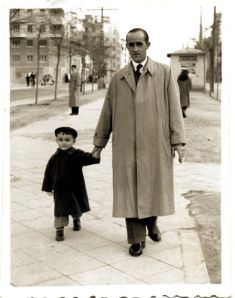 That same day Nadab and Abihu, Aaron’s sons, took their censers, put hot coals and incense in them, and offered “strange” fire to God—something God had not commanded. Fire blazed out from God and consumed them—they died in God’s presence. Leviticus 10:1-2 (MSG)

When I was a young child, I went to my grandparents house with the rest of my family. I have only vague recollections of the exact circumstances, but I know my sister and I were running wild (probably on a sugar high from the candy we consumed from Grandma Golly’s genrously large candy bowl). Somewhere along the line, likely having been told to settle down, I mouthed off to my dad disrespectfully. I was immediately taken behind the Grandpa and Grandma’s garage and received a spanking, which did not hurt me but which I remember to this day. I learned a lesson in that moment that has stuck with me the rest of my life. My father loved me, but he was also my father and deserved my respect. He should not, and would not tolerate me mouthing off to him.

The story of Nadab and Abihu is a hard one to wrap our minds around, but it illustrates an important lesson. If my earthly father, who is every bit a fallible human being, deserves my respect and honor, then how much more honor and respect does my Heavenly Father deserve who is the holy Creator of the universe? At the time of Leviticus, God’s people were like young children in their understanding of who He was. I believe God was trying to teach the entire nation some very basic concepts like a parent teaches their toddler.

I wonder if we sometimes focus so much on God’s grace and forgiveness that we lose respect for God’s holiness and omnipotence. Perhaps it would do me good to, spiritually speaking, be taken out behind the garage once in a while when I forget. It might remind me that God is my Heavenly Father, but He’s not my ol’ man.