Now there were some Greeks among those who went up to worship at the festival. They came to Philip, who was from Bethsaida in Galilee, with a request. “Sir,” they said, “we would like to see Jesus.”
John 12:20-21 (NIV)

I recently read an interview with a social scientist in the Wall Street Journal who has spent his academic career studying the blending of people groups within a culture. With the current cultural conversation around prejudice and racism, he raised some interesting facts that no one is talking about. Leading up-to World War two, ethnic groups in America kept to themselves. Italian, Irish, Dutch, German, and the like congregated together in neighborhoods and/or small towns. Prejudice and conflict between ethnicities was strong. Even in my small town of Pella, Iowa there once was a time when a neighborhood on the south side, known as “South Pella” was predominantly Irish amidst our town of Dutch immigrants.

Then after the war, in which different ethnicities fought together side-by-side and gained respect for one another, people began to intermarry. Ethnic prejudice is relatively non-existent today compared to what it was. The “melting pot” blended ethnicities. Now, the scholar says, the number of bi-racial couples has been rising steadily for decades. Some 20% of our population no longer fit into the categories of White, Black, Hispanic, or Native American because they are the offspring of bi-racial couples for which we have no applicable choices on the census form. With each subsequent generation the number of mixed race individuals will grow. Races, he believes, will melt together just as ethnicities have done. It’s already happening, though no one is talking about it.

A modern reader can scarcely understand how racial, gender, and religious prejudice were a way of life in Jesus day. One of the things that made Jesus a “radical” in the eyes of the religious leaders was His intentional crossing of every social boundary. Jesus crossed both ethnic and gender lines when he spoke to the Samaritan woman. He then taught and performed miracles in Samaria at a time when good Jews typically went out of their way to travel around Samaria because the hatred between Jews and Samaritans ran so deep. Jesus’ ministry among the Samaritans threatened the orthodox ethnic prejudice that was part of the culture of the day. Jesus healed a Roman Centurion’s son when Roman were the hated, occupying enemy. Jesus touched lepers. Jesus partied with tax collectors and unrighteous sinners that any good, religious Jew would self-righteously avoid.

In today’s chapter, John slips in an interesting fact. It’s the last week of Jesus’ earthly life, a group of Greeks ask Jesus for an audience. Greeks were another racial group that good Jews avoided since they regarded them as dirty and inferior. Jesus, however, welcomed them, though John does not share any of the conversation He had with them. The fact that Jesus welcomed them is important to John’s first century readers because the number one conflict in the early Jesus Movement was the long-standing prejudice between Jews and non-Jewish Greek “gentiles.” John was addressing those who might say, “Jesus never hung out with Greek gentiles, so why should we?”

John is also connecting the welcoming of the Greeks to something Jesus says later in the chapter: “And I, when I am lifted up from the earth, will draw all people to myself.” In drawing “all people,” Jesus boldly sets forth His mission to bring love, salvation, and redemption to anyone who believes regardless of DNA, gender, skin color, ethnicity, social status, economic status, family of origin, tragic mistakes or messed up life.

The Greek word that John uses for “lifted up” is hypsoō which has multiple definitions. It means literally “lifted up” (as on the cross) and also means “exalted” (as in resurrected and glorified). How fascinating that “exaltation” comes through suffering, just as Jesus said in today’s chapter: “Anyone who loves their life will lose it, while anyone who hates their life in this world will keep it for eternal life.”

In the quiet this morning, I’m feeling both inspired and challenged. I’m inspired by Jesus’ example, and His mission. John would also write the book of Revelation in which he is given a glimpse of eternity. He describes people “of every tribe and people and language and nation” gathered together to “exalt” the glorified Christ.

I believe in the Kingdom come,
when all the colors bleed into One.

At the same time, I am challenged to reclaim Jesus’ example of crossing any and every social boundary, excluding no one in channeling God’s love, and to exhort fellow believers in my circles of influence to do the same…until, together, all colors cross into a new reality and bleed into One. 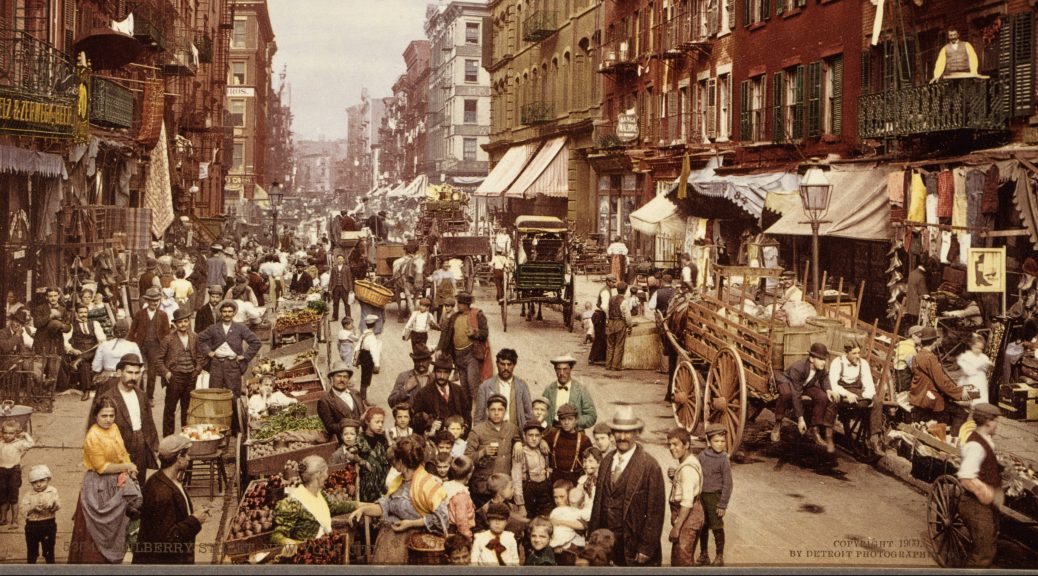 You shall not oppress a resident alien; you know the heart of an alien, for you were aliens in the land of Egypt.
Exodus 23:9 (NIV)

My Vander Well family in America is here because of one ancestor, Walter Vander Well (born Wouter van der Wel) who came to the States from South Holland and settled in northwest Iowa in the 1880s. He was part of multiple waves of Dutch immigrants who settled across Michigan and Iowa, founding rural towns like the one Wendy and I call home today. Five generations later there’s a small army of Walter’s descendants spread across the continent from Michigan to Iowa, Canada, and all the way to the west coast.

Immigration is a fascinating thing. Wendy and I were privileged to see a play at London’s National Theatre back in 2009. It was called England People Very Nice by Richard Bean. The setting of the play is a poor tenement building in London and a neighborhood pub. It humorously chronicles the multiple waves of immigrants to flood into Britain over time from French, to Irish, to Jewish, and Bangladeshi. Each wave lands in the low-rent tenement building and raises the ire of the locals in the pub. The previous wave who was hated by the locals, now find themselves being the locals hating the next wave of immigrants. It continues to stir conversation for Wendy and me in light of the immigration issues of our day.

I have observed this same pattern in the experience of my Dutch ancestors who initially struggled to acclimate to life in America. The Dutch huddled together in small communities and clung to their Dutch neighbors, language, and way of life. This often fueled local resentment towards them. My grandparents were both the first generation born in the States and they both spoke Dutch fluently. They refused to teach my father and his brother because of prejudice against the Germanic sounding language during World War II. Our little town, both steeped in its Dutch heritage and proud of its successful American experience, is now sometimes criticized (a la England People Very Nice) of being closed to aliens moving in.

In today’s chapter, God continues to provide the ancient Hebrews with specific rules for life. God repeats the rule mentioned in yesterday’s chapter about treating foreigners living among them with deference. Fascinating that it’s mentioned twice in such proximity to one another in the text. It leads me to wonder if the repetition speaks to the importance God places on it, or the knowledge that it will a tough one to obey given human nature. I personally conclude that it’s a case of “both, and.”

As I mulled this over in the quiet this morning I couldn’t help but think, once again, beyond the letter of the law in the text, to the Spirit of the law to which Jesus pointed time and time again. Far from being obedient to the command, Jesus’ people separated themselves from the aliens living among them. They treated foreigners and those of mixed-race, like the Samaritan people, as inferior. They created systemic social and religious barriers much like the ones we are addressing in our own culture today.

When Jesus told the story of the Good Samaritan, when He spoke to the Samaritan woman at the well, and when He commanded His followers to take His message to Samaria, He was addressing systemic racial prejudice. Jesus was pointing His own people back to the heart of God that motivated the law repeated twice in yesterday’s chapter and today’s. He was, essentially, pointing to His own law of love: “Love your neighbor as yourself.” Isn’t that what God says in the text? “You’ve been an alien in a foreign land. You know what it’s like. You’ve been the victim of prejudice and hate. So treat the aliens living among you with loving-kindness the way you wished you’d been treated in Egypt.”

Jesus’ followers did just that and “turned the world upside-down.“

I’m reminded this morning that Jesus was not about adherence to textual rules. Jesus was about following God’s Spirit to speak, act, and relate to others in accordance with God’s heart. As a follower of Jesus, I’m called to do just that in my own world and my own culture. That’s what I want to do. That’s who I want to be, increasingly, this day and each day of this earthly journey.

Of course, that requires me to act differently than human nature has led people to behave in ancient Judea, in London tenement houses, and in Dutch-settlements in America, along with almost every other people group on the earth. May I speak and behave in such a way, with anyone with whom I interact, regardless of what they look like or where they are from, that it would be said of me: “Jesus’ people very nice.”